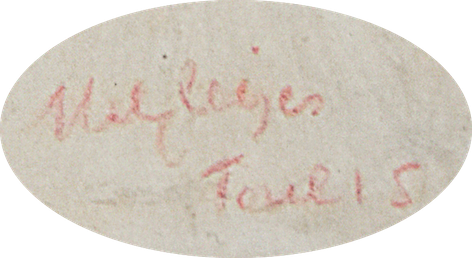 The works of Albert Gleizes reflect his apprenticeship with his father, who was a drafter, facilitating later his cubist research. His spirit and culture have earned him numerous friendships. He was one of the founders of the Abbey of Creteil, with Georges Duhamel and Vildrac. Called shortly after the beginning of the war, he went in 1915 to the United-States. He came back in France in 1919, after a short journey in Spain and Portugal.

In 1927, he created religious, handmade and artistic Communities of Moly-Sabata (Sablons, Isère) of which he wrote the principles in 1932 in Homocentrisme, Return of Christian Man and The Form and the Sotry. From 1939, he settled in Saint-Rémy-de-Provence where he continues to work surrounded by disciples, in a mystical community’s climate.

He participated to activities of the Puteaux Group with Jacques Vilon, La Fresnay, Metzinger, and the Salon de la Section d'Or where he exposed his capital artworks since the war.

In 1913, he took part to the historical exhibition Armory Show in New York, where his artwork The Woman with the Phlox (that already made sensation at the Salon of Independents in 1911) provoked more reactions than Picasso or Braque.

After an impressionism-inspired painting, landscapes of Gascogne or Picardie, he was one of the first inspired by Cézanne and his cubism. Thanks to Paul Fort and Emile Verhaeren, he met the future creators of the movement, Apollinaire, Léger and Metzinger. With The Tree, he attests his natural evolution toward Cubism.

After a synthetically phase, then analytic (which he assures have been the inventor with Metzinger), he is more interested in composition and dynamism than the form.

During his stay in the United States, he painted compositions inspired by urban landscapes, but first of all he recovers faith, that will give a religious impulsion to his work. Back in France, he goes towards a non-figurative representation, and in 1931 adheres to abstraction-creation movement. Preoccupied by sacred art, he tries in 1917 to renew the genre in the language of modern abstraction. Gleizes saw in abstraction in art the dematerialisation of thought, looking for its spirituality.

Cubist painter, he was also one of the rhetorician the more fecund and clear. In 1912, he published with Metzinger Cubism, and in 1919 The Painting and its rules, where he makes the synthesis of plastically discoveries of Cubism and religious subjectivity of Middle Ages. In 1947, a huge retrospective was dedicated to him.