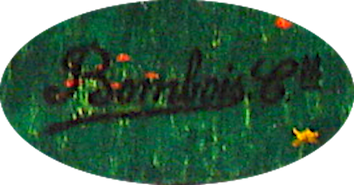 Camille Bombois started painting scenes of rustic life in a naive manner in 1900, while he was employed in a farm. After some different occupations (local wrestling champion, road mender), he started a night job in a printing shop that allowed him to paint during the day. Famously strong, he was engaged in a Circus, period that he describes in many paintings: bright light, colours juxtaposed, parade actors, athletes, cirque horsemen, curvy female dancers.

In 1922, he is noticed by a poet and journalist who writes a first article on Bombois in the revue Rythme et Synthèse. In 1924, Wilhem Uhde discovered him and bought a large part of his work. He presented Bombois at the Quatre-Chemins Gallery with le Douanier Rousseau, Louis Vivin and Séraphine de Senlis, and at Georges Bernhaim Gallery in 1932 under the name Primitifs Modernes. In 1937, Bombois is invited by Andri-Farcy to participate at the historical exhibition Maîtres Populaires de la Réalité.

His first solo show is in Paris in 1944. In 1964 he his exhibited at Musée d’Art Moderne in Paris for the exhibition Naïve’s World, then at Museum of Modern Art in New-York.

Having acquired a certain reputation, Bombois lived comfortably on his painting. After his death, many exhibitions were dedicated to him (New York in 1972 and 1978, and Paris in 1981). The first part of his life prepares his second life as painter. In his artwork the themes are intertwined. The paintings related to childhood memories and landscapes contrast with others paintings, by it high – quality execution, and showing poetical sensitivity of Bombois that relates him to le Douanier Rousseau.

His great and obsessional theme, the most recurrent one, is his wife, of whom he painted portraits without hand or head but with her feminine advantage always highlighted.