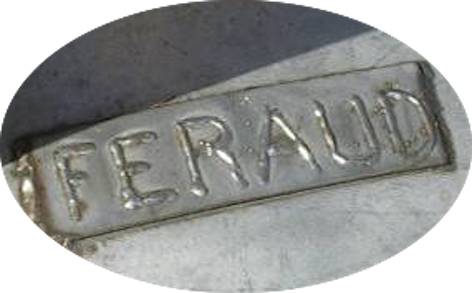 The son of a « Medicinal Nobel Prize » winner and of an Opera singer, Albert Feraud arrived in Paris just before the war in order to finish high school. He went to Nîmes during the hostilities and pursued his schooling at the Beaux-Arts Academy in Montpellier, then Marseille and finally in Paris, where he studied in the workshop of Alfred Janniot. In 1951, Albert Féraud received the Prix de Rome of sculpture. Spending three years as a pensionary at Villa Medicis, Albert Féraud developed a great sense of equilibrium and learned sculptural harmony.

In 1954, back in France, Féraud abandoned classical expression and started experimenting with different materials: lead (influenced by Giacometto), and stainless iron (that his friend Cesar just discovered). During the 1960’s, Albert Feraud became interested in material recovery and his work evolved into an increasingly marked abstraction. With other sculptors, such as his friends Cesar and Michel Guino, he found many of his materials in cars dump, industrial discharges.

His first two major exhibitions were in 1960 and 1961 at the Galerie de Paris 7. Every year since then, an exhibition dedicated to his work took place in France and abroad (Basel, Zurich, Montreal, Lucerne , Frankfurt, Berlin, Warsaw , Turin ... ). An extensive bibliography is devoted to the work of Feraud, whose name is related to the exploration of the countless possibilities of stainless steel.

Having a vast mechanical studio in Bagneux, still full of machineries, Féraud started a new career; folding, assembling, welding, twisting, shredding, and adjusting metal in his very expressive compositions. His favourite material was the weld iron. Freed from the Prix de Rome label, he was able to freely expose what he created.

Albert Feraud is passionate about the projection of lines, curves, spirals and arabesques, previously privileged for two-dimensional works. His sense of harmony and balance demonstrate the quality of his works, both for the amateur of sculpture as well as for the architect looking for an animation. In 1989, Albert Feraud was elected a member of the Académie des Beaux-Arts. The victim of a stroke, he stopped working several years before his death in 2008.