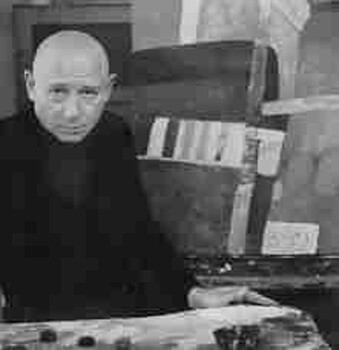 Maurice Estève, born in 1904 in Culan (Cher), is one of the major painters of the new school of Paris.

He spent his childhood in Culan with his grandparents ; then he went to Paris in 1913, where he discovered the Louvre. He is particularly impressed by the Battle of San Romano by Paolo Uccello, but also by the works of Courbet, Delacroix and Chardin. Back in Culan for the summer, he stayed there during the war and began painting since 1915. He lives in Paris again from 1918. Apprentice in a typographer, then to a drawing workshop with modern furniture, Estève also attends evening classes of drawing and painting. He discovered Cézanne in 1919 and was very influences by his coourist skills. Encountering opposition to his vocation from his worried father, he takes the lead of a drawing workshop for textile in Barcelona during a year.

Back in Paris, Estève attends the free workshop of Colarossi Academy. Marked so far by primitives paintings and the works of Cézanne, he suffered temporarily in 1927 the influence of Surrealism, notably from Giorgio de Chirico. He had his first solo exhibition in 1930 and the same year became interested in movies and theater.

Upset by the events of the Spanish Civil War, he crosses in 1936 a brief expressionist period. On the advise of Braque he is asked to exhibit in 1936 in Stockholm with Matisse, Picasso, Juan Gris and Fernand Léger. He participated the following year to achieve the walls of Robert and Sonia Delaunay pavilions for Aviation and Railways in the World Exhibition in Paris. Called to war until August 1940, he exhibited several times in 1942 and, at the Galerie de France in 1943 alongside Bazaine, Gischia, Le Moal, Manessier, Pignon and Singier.

Estève accepts an exclusive contract from 1942 to 1949 with the Galerie Louis Carré who realizes in 1945 a major exhibition "Bazaine, Esteve, Lapicque". He began to regularly exhibit abroad, particularly in Scandinavia. In 1947 his series of paintings passed from a formal stylization to a non-figurative painting, free of all realism, highly structured and intensely colored. He realizes in 1949 a first lithography to illustrate La plaie ne se referme pas, a collection of poems of Jean Lescure published by Charlot editions.

In addition to his painting exhibitions at the Square Gallery in the Villand Galanis gallery and then to the Claude Bernard gallery, Esteve who regularly works during summer in Culan, subsequently completed numerous lithographs, watercolors but regularly practice as charcoal, monotype, collage. He also designed the stained glass windows of the church of Berlincourt in the canton of Jura in Switzerland (1957) and tapestry models. In 1970 he received the National Grand Prize of the arts. From 1981 are organized several retrospectives of his work.

The city of Bourges decided to present over a hundred works given by Esteve to the city in 1985 in the hotel of Aldermen. This hotel, restored with the help of historical monuments and the direction of France museums to become the Estève museum, inaugurated in 1987. Two other donations complement its collections, first in 1989 , then, for the 10th anniversary of the museum in 1997.

Esteve settled permanently in Culan in 1995 and remained there until his death. He is buried in the cemetery of Prahas, in Culan.