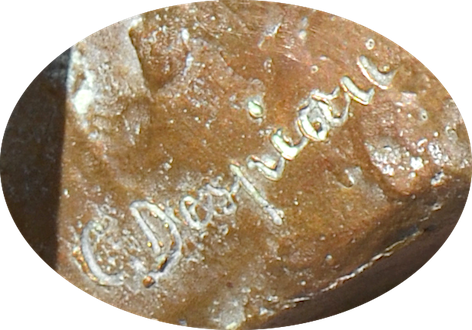 A student at the Lycée Victor-Duruy, Despiau was first noticed by his art teacher, Louis Henry Ismael Morin who helped him get a scholarship from the Landes department. With the help of this scholarship, he moved in Paris in 1891 and joined the National School of Decorative Arts and the Beaux Arts academy in the studio of sculptor Louis-Ernest Barrias.

In the early 1900s, Despiau was particularly interested in portraiture and he exhibited annually at the Salon of the National Society of Fine Arts, where his portraits were noticed for their plastic strength. In 1907, Auguste Rodin asked Despiau to work with him. Despiau accepted and thus turned to sculpture.

In 1910, Despiau exhibited his Buste en marbre de Paulette in the Salon of 1910. Modeled after the face of the young Paule Pallus, nicknamed "Paulette", this bust releases a great youthful serenity, making it one of the finest portraits of the collection. The bust was then purchased by the state (Mont-de-Marsan Museum). He created various busts in the same spirit: La Petite fille des Landes (1904), Cra-Cra (1917), the Portrait d’Alice Derain (1922) or Andrée Wernert (1923), daughter of the art critic Georges Wernert. The originality of the composition comes from the absence of any anecdotal movement, unlike the taste of the time. Instead, his sculptures often seemed hieratic : they have an archaic side, inspired by folklore as much as the primitive arts. Concerned exclusively with the human figure, Despiau expresses the inner life of his models over their relationship with the world. His portraits involve no message, no drama, no feeling. His works reflect the reaction of this generation of sculptors against academicism official spheres.

In 1914, Despiau was called to serve during the First World War. He was then forced to abandon the work that was entrusted to him by Rodin on his sculpture Génie du repos éternel, a work which was supposed to ornate the memorial of the painter Puvis de Chavannes. Committed to the service of camouflage during the war, Despiau met a lot of painters and sculptors who imagined patterns to confuse the enemy. Back in Paris after the war, he refused to complete his work on the Génie du repos éternel because Rodin had died in 1917 and wasn’t there anymore to guide his work. The unfinished marble is now exhibited in the gallery of the Rodin Museum Gardens in Paris.

In 1923, Despiau became one of the co-founders of the Salon des Tuileries as well as a teacher at the Academie de la Grande Chaumiere. In 1927, he finds commercial success and becomes a professor at the Scandinavian Academy in Montparnasse. Finally, he finds fame and fortune during his solo show in New York at the Brummer Gallery in 1927, which took place at the initiative of the parisian gallery Barbazanges. This exhibition would make him a recognized sculptor in the United States and then, by extension, in Europe.

He was commissioned for Le Réalisateur in 1929 by the widow of Emile Mayrisch, a founder of the group Arbed in 1911. The bronze version of this sculpture is settled in the garden of the castle of Colpach (Grand Duchy of Luxembourg). It dominates the tomb of Émile Mayrisch, that has been drawn by the architect Auguste Perret.

From the year 1932, Despiau met with Assia Granatouroff, who was the model of Dora Maar, but also with Germaine Krull or Chaim Soutine. These meetings allowed Despiau to sublimate the body of women. He sculpted Assia, who’s athletic body obeys the canons of the ideal woman.

In 1937, Despiau received a commission for a colossal statue of six meters height : Apollo, for the court of the Museum of Modern Art of the City of Paris for the 1937 World Exhibition. Despiau would work on this project until the end of his life but never delivered it to the City. The Apollo was melted in bronze posthumously.

A leading figure of independent sculptors, Despiau enjoyed success abroad, including in the United States, where his solo exhibition in New York in November 1927 was followed by other important exhibitions and various tributes from 1930 to 1948. Japan also provided him an enthusiastic welcome and, in the early twenty-first century, Despiau is still the subject of great admiration. He also exhibited and sold his works in all European capitals. He participated in the Universal Exhibition of 1937 in Paris, where he took part on the committee of selection, and presented fifty-two sculptures exhibited at the Petit Palais in a room dedicated to him exclusively.

He participated, in November 1941, to a « study tour » in Germany with many french painters and sculptors, agreeing to visit the highlights of German culture and artists' studios. This journey that brings together personalities like André Dunoyer de Segonzac, Paul Landowski, Henri Bouchard, Louis Lejeune, Roland Oudot, Raymond Legueult Paul Belmondo, but also avant-garde artists like Kees van Dongen, Maurice de Vlaminck, Andre Derain and Othon Friesz was severely reproched to all of them after the end of war.

After the war, Despiau, who had no taste for teaching, refused to have students. Yet he advised many artists with kindness and enthusiasm. Thus, one finds his artistic influence in the works of Henry Arnold, Robert Wlérick, Léon-Paul Belmondo or Ernest Drivier. Many other sculptors and painters, will claim to have been his "students", just as the Swedish sculptor Gunnar Nilsson does. (1904-1995).