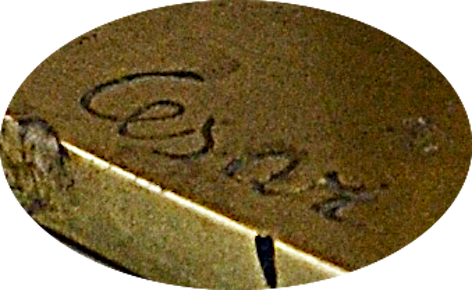 Born to Tuscan parents in the Belle-de-Mai neighborhood in Marseille under the name of César Baldaccini, César began his artistic studies at the age of fifteen. He joined the Ecole des Beaux-Arts in Marseille in 1935 and then later joined the Ecole Nationale Superieure des Beaux-Arts in Paris in 1943. This was a period in which he worked the plaster before realizing his first sculptures in scrap metal. When he turns to inexpensive recovery materials for the sake of economy, he soon discovers, in metals, the place of expression of his creative power.

The spiritual son of Rodin and Giacometti, Cesar met Picasso and Germaine Richier in Paris, and lived in the same house as Alberto Giacometti in the Saint-Germain-des-Prés district. These encounters had a major influence on the beginnings of his artistic creation. Cesar is also very much inspired by the work of Brancusi, Pablo Gargallo and Julio Gonzales.

His assemblages of metallic waste gave birth to a disturbing bestiary, which allowed him to propose his own very expressive versions of the human figure.
In 1956 he took part in the Venice Biennale.

At the same time, his research led him to the invention of more audacious creative techniques, with first of all the "compressions" of automobile bodies. He discovered this technique in 1958, while rummaging at a scrap dealer in Gennevilliers. Using a hydraulic press, he compresses cars and exposes them to the public as sculptures. His "Compressions" made an absolute scandal at the Salon of May of 1960.

Then in 1965, he created the "Expansions" of polyurethane, where in his hands, the liquid resin spreads horizontally. The "Expansions" are available in bronze variations.  It was during this time that Cesar creates one of his best-known pieces: his Thumb.
Through the Compressions, Human Footprints and Expansions, Caesar challenges the canons of traditional sculpture. The use of the hydraulic press, the expanded polyurethane and the impression allows it to directly appropriate the real, reducing its manual intervention. Marking Cesar's fascination with the aesthetics of industrial waste, these works have made him one of the leading representatives of the Nouveau Realisme in France (Yves Klein, Arman, Jacques Villeglé and Raymond Hains). From the 1980s, the artist returned to a more traditional and deliberately aesthetic sculpture.

In 1997, the National Gallery of Jeu-de-Paume in Paris devoted a great retrospective where César exhibited his "Great Blind Self-portraits" and "Vanities". He ended his career with this series of portraits and self-portraits.
On December 6, 1998, César died at his home, in Paris, at the age of 77 years.

A major artist of the 20th century, he defined himself as an "absolute self-taught."