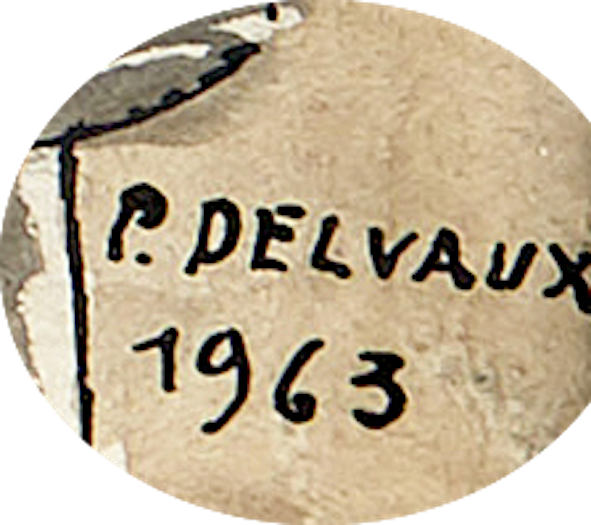 Son of a lawyer of Brussels, Paul Delvaux studied architecture then painting at the Beaux-Arts Academy in Brussels from 1920 to 1924. He received training in classical painting, nourished by a double admiration for Ingres and David. His first works of 1920 are post-impressionist seascapes, almost all destroyed by Delvaux himself. However, he kept some of his later works (from 1924), influenced by Permeket and Smet's expressionism.

In 1934, Delvaux discovered the work of De Chirico during his exhibition in Brussels, and became a surrealist painter, without joining the group. However, he exhibited with André Breton and discovered Magritte, which revealed to him the power of moving objects and human beings out of their logical context. Delvaux notably exhibited at the International Exhibition of Surrealism in Paris in 1938.

In his first personalized works such as Harmony orThe daughters of the forest or Women facing the sea, we can notice a taste for hieratical pose and hanging movement, maybe influenced by the works of Munch or Hodler. In this first period – 1936-1939 – he defined his frightening universe where young women, often naked, wander in a narrow-perspective setting. Jules Verne’s novels and Botticelli’s iconography inspire his visual universe. The principal theme of his work is the initiatory journey, in pursuit of Eden, catharsis of dull and unfulfilled desires.

The big retrospective in 1945 at the Beaux-Arts Palace in Brussels reveals Delvaux’s work to the audience. He was invited many times in the Biennale of Venice and the Musée des Arts Décoratifs of Paris who dedicated a vast retrospective to him. Claude Spaak titled Delvaux’s works between 1399 and 1944 as the “Italian Period”: after two travels in Italy, Paul Delvaux situated his works in ancient times. In these years, Ensor and his skeletons influenced him. In 1945 – 1946, we can notice the influence of the School of Paris in his work. Invited twice to the Venice Biennale (1948 et 1954), however, the Italian clergy censures his works for its nudity.

Elected correspondent of the Royal Academy of Belgium in 1956, Paul Delvaux was then elected member of this academy in 1958. He also receives a noble title from the King of the Belgians but he does not accept it. In the village of Saint-Idesbald on the Belgian coast, where he lived several years, there is, since 1982, a private museum dedicated to him. Adjoining the Fondation Paul Delvaux, founded in his lifetime by the artist himself. This museum contains the largest collection in the world, paintings, drawings and prints by Paul Delvaux.