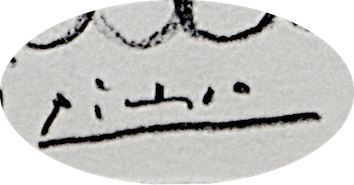 A creator of an exceptional longevity, Pablo Picasso revolutionized the art of the 20th century that only his name embodies. He passed through cubism then surrealism, before seeking perpetual plastic innovations.

The son of a modest painter – who was also a drawing professor, and of a Genoese mother, from who he takes his name, Pablo Picasso arrived in Barcelona in 1895. Medieval Spanish art and Greco's works interested him, he also discovered Edvard Munch, Théophile Alexandre Steinlen and Henri de Toulouse-Lautrec.

Pablo Picasso exhibited his work for the first time in 1899. His painting was quite classical. The concerns related to the contents expressed themselves in different colours: blue expressed his revolt against human misery (“Blue Period” [1901-1904]: Woman with blue scarf, 1902), while pink revealed a more festive signification, with his passion for circle (“Rose Period” [1904-1906]: les Bateleurs, 1906).

In Paris, where he lived from 1904 in the famous Bateau – Lavoir in Montmartre, Picasso began a radical evolution. This was the result of his aspiration for an essential plastic influenced by Iberia and African sculptures, his new discoveries (Jean-Auguste Dominique Ingres, Paul Cézanne, Paul Gauguin), and his meetings with artists such as Henri Matisse, Georges Braque and André Derain.

A disconcerting conception began, of which Les Demoiselles d’Avignon (1906 – 1907) is the manifestation. Braque was outraged, but Daniel Henry Kahnweiler, a young German collector, was excited.

Geometrisation introduced by Les Demoiselles d’Avignon intensified under fragmentation and led to cubism.

Figures and still – life painting confirmed the explosion of volumes that led to a structuration by plans and a global vision of the painting (Kahnweiler’s portrait, 1910). This was the limit of the abstraction, with reduced colours to brown and grey shades, with forms reduced to signs – typical of the “hermetical” phase of cubism.

In 1911, Pablo Picasso introduced in his painting numbers, letters or words in the pictorial space. Then, in this space, he introduced real elements, such as a piece of newspaper, wallpaper or wood imitations (Nature morte à la chaise cannée, 1912).

Another period began when Picasso collaborated with Serge de Diaghilev for decors and costumes for many ballets during a journey to Rome (Parade, 1917, Pulcinella, 1920). He leaned towards an antiquity and monumental painting (la Flûte de Pan, 1923).

In the same time the cubist experience (les Trois Musiciens, 1921) achieved multiple and contradictory prolongations. From the disarticulation of the form – and under influence of surrealism – appeared the “convulsive” beauty invoked by André Breton (la Danse, 1925), and the violent eroticism of his owns fantasy (Figures au bord de la mer, 1931).

Pablo Picasso was constantly haunted by Spain and abundantly treated corrida them (la Mort du torero, 1933). In the civil war ‘s context that hurt the country, Pablo Picasso accentuated the deformations of his subjects (Femmes dans un intérieur, 1936) and became stimulated by the denunciatory militancy. He passed the Second World War in Paris and his expression became more anxious (Nature morte au crâne de bœuf, 1942), or went back to a timeless pathetic (l'Homme au mouton, bronze, 1944).

Pablo Picasso proclaimed that he made painting “as a revolutionary”. His commitment became materialized by his adhesion in 1944 to the Communist party. In the South of France, where he decided to live, Picasso let his hope for a better world free from war express itself (la Joie de vivre, 1946; la Guerre et la Paix, 1952). Among new experiments, he created an amazing bestiary using both sculpture (la Chèvre, 1950; la Guenon et son petit, 1952) and ceramic. He also achieved his engraving work of almost 2 000 prints.

With the exception of some paintings – as Portrait d'Olga dans un fauteuil (1918) – the faces of these women are more material construction than model. Each element – nose, hears, neck – can be deformed and put according to the expression wanted. Picasso aimed to grasp personalities.

The artistic activity of Picasso just ended at his death, at the age of 91. His heirs made a huge dotation that constituted the core of the immense and representative collection of the Musée de Picasso in Paris, inaugurated in 1985.