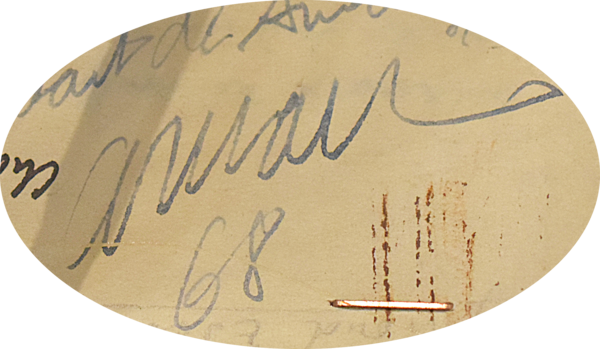 Armand is the only son of Antonio Fernandez, an antiques and furniture merchant of Spanish origin, and Marguerite Jacquet. From an early age, Arman showed great aptitude for draing and painting, and carried out his studies at the 'Ecole des Arts Décoratifs' in Nice. Then, Arman's interest in Far Eastern philosophies and arts led him to the Ecole du Louvre in Paris in 1949.

At the qge of 19, Arman became friends with Yves Klein and Claude Pascal, whom he met at a judo school in Nice. Together, the trio of friends created the "Groupe Triangle" in 1950. They decided to sign their paintings with only their first name, just like Van Gogh to whom they had a deep admiration.

In 1953, Arman marries the musician Eliane Radigue, of which he will have three children: Françoise, Anne and Yves.

The artist, influenced by the works of Kurt Schwitters and Jackson Pollock, tries to practice the art of Stamp and exposes the first "Cachets" in Paris in 1956.

On the cover of a catalogue, following a printing error, "Armand" becomes "Arman". He formalizes his artist's signature on the occasion of an exhibition at Iris Clert in 1958. The year 1959 saw the beginning of "Accumulations" of objects.

In October 1960, he made the exhibition "Le Plein" (The Full) where he filled Iris Clert's gallery with garbage and selected contents of garbage cans. This exhibition was the counterpoint of the exhibition "Le Vide" (The Void) made two years earlier at the same gallery by his friend Yves Klein.
The same year, Arman became one of the founding members of the group of Nouveaux Realistes "new perceptual approaches of the real" alongside François Dufrêne, Raymond Hains, Martial Raysse, Daniel Spoerri, Jean Tinguely and Jacques Villeglé, later joined by Caesar, Mimmo Rotella, Niki de Saint Phalle, Christo and Gerard Deschamps and also Pierre Restany as a theorist.

From 1961, Arman developed his career in New York where he resided and worked half of his time, alternating with his life in Nice until 1967, and then in Vence. During this period, the artist used new materials such as polyester and plexiglass.

In 1962 Arman realizes his first "Combustions".

In the mid-1960s, personal retrospectives of his work took place in Krefeld, Amsterdam, Brussels, and Minneapolis

In 1971, Arman marries Corice Canton and two other children, Yasmine and Philippe, are born from this union.

Arman will define himself as a "showman of objects" in the image, he says, bear showmen of the Middle Ages.

Throughout his life, Arman was also a passionate collector of everyday objects: collecting watches, weapons, pens, and objects of art especially those of traditional African art for which he was a connoisseur, and an appreciated and recognized expert.

Arman died in New York in October 2005. He had dual French and American citizenship, which he had acquired in 1972.