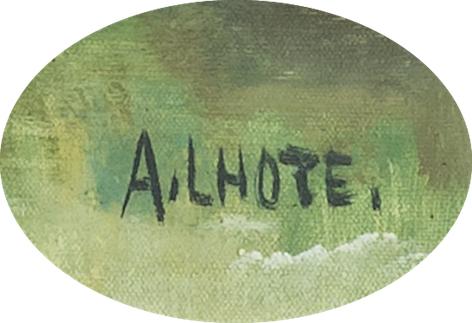 Lhote was born in Bordeaux and learnt wood carving and sculpture from the age of 12, when his father apprenticed him to a local furniture maker to be trained as a sculptor in wood. He enrolled at the Ecole des Beaux-Arts in Bordeaux in 1898 and studied decorative sculpture until 1904. Whilst there, he began to paint in his spare time. He left home in 1905, moving into his own studio to devote himself to painting. He was influenced by Gauguin and Cézanne and held his first solo exhibition at the Galerie Druet in 1910, four years after he had moved to Paris.

After initially working in a fauvist style, Lhote shifted towards cubism and joined the Section d'Or group in 1912, exhibiting at the Salon de la Section d'Or. He was alongside some of the fathers of modern art, including Gleizes, Villon, Duchamp, Metzinger, Picabia and La Fresnaye. He was then in contact with the famous art dealer Ambroise Vollard, and became friends with Andre Gide and Maurice Denis.

His fame grew and he organized his first solo show under the patronage of Jacques Rivière and André Salmon. He sought to create a modern plastically language, without denying the tradition, from Fouquet to Ingres and Cézanne. Inspired by the synthetism of Gauguin (circa 1906), then by an elegant cezannism (circa 1910), he adopted a synthetic cubism around 1917, similar to that of La Fresnaye and Gris.

The outbreak of the First World War interrupted his work and, after being discharged from the army in 1917, he became one of the Group of Cubists supported by Léonce Rosenberg. In 1918, he co-founded the Nouvelle Revue Française, the art journal to which he contributed articles on art theory until 1940. Lhote taught at the Académie Notre-Dame des Champs from 1918 to 1920. In 1922, he founded his own art school in Montparnasse, where Tamara de Lempicka and Henri Cartier – Bresson studied.

He organized a lot of lecture tours on his theoretical findings in France and abroad. In 1938, the painter purchased an old house in Gordes, where he saw the beginning of the war with his wife and his colleague painter Marc Chagall.

The couple stayed in this house until 1942, then went back to Paris, where Lhote became a teacher again in the school of painting. At the end of the war, André Lhote made a new lecture tour in Belgium, England, Italy, and for the first time in 1950 in Egypt, where he gave some conferences at the Faculty of Fine Arts in Cairo.

In 1952, his theoretical essays on art led him to Rio de Janeiro, Sao Paulo, Belo Horizonte and Bahia. In 1955, The Grand National Prize of Painting rewarded him for his artwork. The UNESCO committee for the sculpture named Lhote President of the “International Association of Painters, Engravers and Sculptors” organization.