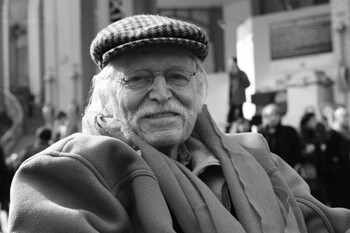 Bernard Quentin was a painter, sculptor and visual artist belonging to the School of Paris, born on the 22nd of June 1923 in Flamicourt (Somme). His work, mostly exploring writing and spelling, is called semiotic art or scriptural art.

Bernard Quentin arrived in Paris around 1940 to study painting, sculpture and architecture at the Ecole Nationale des Arts Décoratifs and the Ecole Nationale des Beaux-Arts. Active in the Resistance within the Manipule network between 1942 and 1944, Bernard Quentin frequented in 1945 the Maison de la Pensée Française where he befriended Pablo Picasso before returning to the Ecole Nationale des Beaux-Arts, before being interrupted by the war. Simultaneously, he settled in 1946 in Saint-Germain-des-Prés, where he frequented existentialist and surrealist circles. Along with painters such as Wols and Camille Bryen and the theorist Isidore Isou, Bernard Quentin became part of  the" bande de Boris Vian" with Jean-Paul Sartre, Maurice Merleau-Ponty, Anne-Marie Cazalis and Juliette Greco. At this time, Bernard Quentin, was living with Juliette Greco in an attic room of 7 rue Servandoni.

His first exhibition in 1945 at the Maison de l’université in Paris, was roaming in Switzerland in 1946. It is in Berne that Bernard Quentin discovered with fascination the works of Paul Klee, kept in the house of the son of Klee. He was seduced by this poetic primitivism, which led him to permanently focus his work on the letter and the sign by creating ideograms. He states his interest in cuneiform writing, the Egyptian hieroglyphs, the Scandinavian rune (the study of which he would spend the whole winter in Lapland in 1948), the rock inscriptions of the Valley of Wonders. It is in this field of investigation that in the years 1947-1950, he exhibited his works at Aimé Maeght’s gallery with the group Les Mains éblouies, counting Joan Miró, Alberto Giacometti, Jean Signovert, Alexander Calder and Antoni Tapies, and where he met his great friends Pierre Dmitrienko, Francois Arnal and Serge Rezvani.

In the 1960s, Bernard Quentin expanded his investigations from painting to sculpture by running totem statues and especially its first inflatable sculptures (the Cybules, the Venus of Chicago). These monumental interventions in the landscape, would be seen as the first steps of Land Art. At the same time, he was the first designer to design inflatable seats that were presented in 1963 by the Galerie Iris Clert in Paris during an exhibition self-proclaimed Vision of the future (The show of the year 2104), then presented during the World Fair in New York in 1964, and then mass produced to be sold in the United States and Japan by the Adamoli group in Milan in 1966.

Simultaneously continuing to work on the sign, Bernard Quentin moved to Milan in 1962 for a period of two years, as part of an agreement with the Research Centre Olivetti, moving his work towards new technologies and computer science. Salvador Dalí then called him a "pioneer of cybernetic art and electronic writing."

In 1977, Bernard Quentin created with Jesus Rafael Soto, Jean Messagier, Jean-Pierre Raynaud, Pierre Restany and Serge Rezvani, the collective Art + whose purpose was to extend art in monumental integrations to the environment.

On the creation of the alphabet together, with the choice of calling it Babel, Bernard Quentin explains: "We had to find a universal language, and for that, invent symbols understood by everyone. But the meaning of the symbols may differ from one continent to another. That is why I imposed symbols that can be taken by everyone. It is the universal side. I based my work on Kufic and Zen calligraphy in which each artist adds something more meaningful. " In Bernard Quentin’s work, a color is grammatically meaningful : blue for names, green for adjectives, verbs in red, orange for articles and pronouns. This writing system, created "to unite men," includes 3000 signs that can tell the truth, tell everything. Bernard Quentin has never ceased to explore the range of possibilities included in every word, every sign, every spelling. Graffiti, graffiti shorthand, hieroglyphics, pictograms, fiber optic, electronic letters, form his "semiotic art".