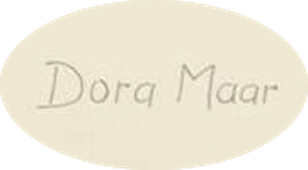 Henriette Theodora Markovitch (1907-1997), daughter of a Croatian architect and of a French mother, became "Dora Maar" in Montparnasse in the 1930s. It is under this name that she learnt photography from Man Ray, fascinated Georges Bataille and seduced Picasso.
Arriving from Buenos Aires, where she lived for a few years with her parents, Dora Maar moved to Paris in the 1920s. She had close ties with the surrealists, André Breton, Paul Eluard, Georges Bataille ... who greatly admired her personality as well as her talents in photography. Some of her photographs, which we forget to attribute to her, have become icons of the surrealist legend.

From 1936, when she began her relationship with Picasso, Dora was the only person authorized to photograph, the different stages of the realization of Picasso's painting :  Guernica, in 1937.
She is one of the female figures in the painting, "The Crying Woman".
Dora gradually ceased all photographic activity to devote herself to painting, first under the influence of the Master, and then, more and more resolutely, emancipating and finding her own unique style.

Almost destroyed after her break-up with Picasso in 1946, Dora Maar moved away from her friends, sharing her life between her house in Ménerbes (separation gift from Picasso) in Provence and her Paris apartment, 6 rue de Savoie, places which served as a sort of mystical withdrawal. We do not know anything about her work as a painter. It had long been thought that she had abandoned her work as an artist. She died in Paris in 1997, but her legend and her enigma remain.