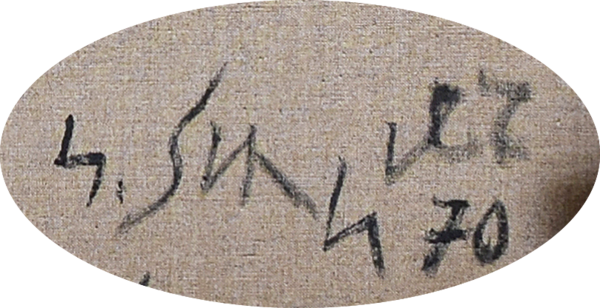 Gustave Singier was born in 1909 in Warneton (Flanders, Belgium). He spent his childhood in Belgium, when it was occupied by the German armies. He arrived in Paris in 1919, and followed, from 1923 to 1926, courses of the Boulle school. Afterwards, he worked from 1927 to 1939 as a draftsman in a store layout company before turning to painting.

Singier met the painter Charles Walch who would encourage him and reveal to him the freedoms of the pictorial expression, especially in regards to color. He took part in the many Parisian Salons from 1936 (Salon des Indépendants, Salon d'Automne, Salon des Tuileries, etc.).

In 1939, he met his neighbor, Alfred Manessier, as well as his friends Elvire Jan and Jean Le Moal. Mobilized the following year in the Belgian army, he was sent to Bagnols-sur-Cèze after the invasion of Belgium.

In 1945, he exhibited at the Salon de Mai which he was one of thr founders of as well as with his friends. He was naturalized French in 1947 and befriended the poet Jean Lescure.

Like other painters of his generation, Singier discovered Kandinsky, Klee, Mondrian; this new way would determine to release the pictorial form. The work of Singier is separate from that of Manessier, finding his own and personal qualities.

In 1949, the Billiet-Caputo Gallery created its first personal exhibition, the Galerie de France then regularly presented his work.

From 1951 to 1954, he taught at the Académie Ranson; from 1967 to 1978 at École nationale supérieure des beaux-arts de Paris. He was a founding member in 1975 of the Salon de Toulon, in 1976 the Salon Vitry-sur-Seine, and was an examiner in 1978 at the Prix de Rome.
Gustave Singier would expand his artistic activities in very different fields, such as mural painting, tapestry, stained glass, mosaic, costumes and sets for theater and opera, engravings.