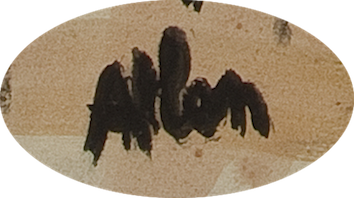 After studying in Constantine during high school, Atlan came to Paris in 1930, at the age of 17, to study philosophy at the Sorbonne. Here, he discovered the tumultuous life of Paris. He graduated with a degree devoted to the Marxist dialectic. He even became an occasional bodyguard for Leon Trotsky in 1933. He prepared the aggregation, while teaching in high schools until 1940, before being dismissed by the Vichy government in the implementation of anti-Jewish laws.

He started painting in 1941, but after joining the Resistance, he was arrested by Germans. He found his salvation in the Saint–Anne Hospital, faking his own madness thanks to his knowledge in psychiatry.

In 1944, he exhibited his works for the first time at the Salon des Surindépendants and in the Arc-en-Ciel Gallery. From that moment on, he participated in every great manifestation of contemporary French art. He exhibited his works many times in solo shows in France and abroad. In November 1956, he exhibited alone at the Bing gallery in Paris, where he had an amazing success.

In 1963, The National Museum of Modern Art in Paris devoted a retrospective with more than two hundred of Atlan's works. The Tel Aviv Museum did the same in 1964. In 1980, some of his works were acquired by the Centre Georges Pompidou, settling an immense recognition of his talent.

If we observe a certain evolution of form and technique from the early expressionist paintings, the work of Atlan comes in an impressive monolithic unity. Atlan 's work is divided into several periods: a first period from 1941 to 1954, where his way of painting is affirmed, but his production was still limited. The most successful period runs from 1954-1955 until his death in 1960. The style of Atlan reaches full maturity when he begins to realize large formats, allowing him to produce major paintings. His pictural technique mixes chalk, pastels and oil on canvas, and he aimed at trying to find materials which offered the matter effects that he wanted.

His language is nearly that of abstract expressionism which links him to CoBRA Group. A dark, smutty and thick style defined simple shapes which he himself called magic, shaping feminine curves, or adding an aggressiveness to his works. He firstly materialized them with bright colours, then softened them. In his style of painting, despite the bright clarity of the compositions, we can very much see a barbaric character and some African reflections.