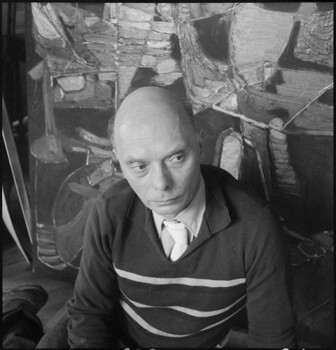 Andrei Lanskoy Michailovitch, better known under the name of André Lanskoy was born on the 31st of March 1902 in Moscow. He is the eldest son of the Count Mikhail Mikhailovich Lanskoy and of his second wife Varvara Vasilyevna Paroussinova. In 1918, after the October Revolution, André Lanskoy fled to Kiev with his family, where he attended the workshop opened by Alexandra Exter (1882-1949). In 1919, at the age of 17, the artist engaged in the tsarist army and took part in the civil war. Having contracted typhus, he followed the White Army debacle in Constantinople up until rejoining his parents in Berlin. Lanskoy reached Paris in 1921, a city he never left until his death.

Soon after, the artist began to study painting at the Academie de la Grande Chaumiere. At that time, André Lanskoy discovered the work of Van Gogh, Matisse, and Soutine, whom we can feel the influence in his work of that time. He then started painting landscapes, still lifes and portraits, in the Slavic tradition, marked by a flattening of perspective.

The year 1923 marks a turning point in his career: Lanskoy exhibited for the first time at the Galerie La Licorne in Paris with some other Russian artists living in Paris, including Chaim Soutine and Iliazd. He sold his first painting at the gallery Vavin-Raspail. He participated for the first time at the Salon d'Automne. Wilhelm Uhde noticed Lanskoy in 1924, buying some of his works and recommending him to the merchant Henry Bing. Lanskoy then signed a two year contract with the Bing gallery. In addition, Uhde helped him to organise his first solo exhibition in 1925. At that time, André Lanskoy also exhibited with Robert and Sonia Delaunay, Leopold Survage, Ossip Zadkine and other Russian artists living in Paris. In 1932, from the 5th to 17th of February, he participated in his first exhibition abroad, in the gallery of French Artists in Brussels with two other Russian artists : Yuri Annenkov and Ivan Puni. The same year, Lanskoy met Alexandra Volinski, who quickly moved in with him and with her daughter Natalia.

The works of Lanskoy quickly reached museums and private collections of famous art. In the late 30s, André Lanskoy gradually distanced himself from figurative representations to work exclusively in the abstract from 1938. He began conducting a series of gouaches, which studied the cutting space with large white lines that divide his subjects before breaking forms by transforming the characters into an assemblage of shapes in soft colors. Lanskoy painted dough with a rich and generous material, harmonies, colorful, are sensitive and vibrant.

A deep friendship united Lanskoy to Nicolas de Stael and they exhibited together in 1948. A major exhibition of his work was organized in Paris in 1948; it was followed by exhibitions in Brussels, London, Lausanne, Zurich, New York, Berlin and elsewhere. Lanskoy is now known and appreciated worldwide. At that time and in the following decade, the international celebrity Lanskoy was strengthened. From the 50s, alongside his painting, André Lanskoy realized cartoons for the tapestry, illustrations of books like Journal d’un fou by Gogol, etc. The artist produced an important amount of work on paper, gouaches, collages, loving to use several creative mediums on the same support, and lithographs. He will also carry mosaics. Lanskoy would become one of the last living representatives of the Russian school. In 1950, his work was presented in Advancing French Art exhibition at the Galerie Louis Carré in New York. It brought together six artists: Jean Bazaine, Maurice Esteve, Hans Hartung, André Lanskoy, Charles Lapicque and Nicolas de Staël. He also participated in the Young Painters USA and France exhibition organized by Leo Castelli at the Sidney Janis Gallery, alongside Jean Dubuffet, Nicolas de Staël, Pierre Soulages and Americans Willem de Kooning, Mark Rothko, Franz Kline and Jackson Pollock. His work from the 50s and 60 is now the most sought period by collectors, including his gouaches.

Within the School of Paris, André Lanskoy is one of the most important representatives of lyrical abstraction and it is as such that his work was highlighted by many exhibitions such as Documenta II in 1958, alongside informal artists at the exhibition Russian painters of the School of Paris in Saint- Denis Museum in 1960. André Lanskoy died in Paris on August 22th, 1976 at the age of 74.