In the twenties, Paris is undoubtedly the capital of art, thanks in particular to the Paris School which groups together in Montparnasse, mainly artists of Jewish origin from Eastern Europe and Russia (Soutine, Chagall, Zadkine ...). Nicknamed the "Prince of Montparnasse, Kisling is one of the major representatives." His studio, located Rue Joseph-Bara in the same building as the poet and art dealer Léopold Zborowski, is a meeting place for painters, poets and writers of the time, like Jean Cocteau, Max Jacob, Juan Gris, Andre Derain ... 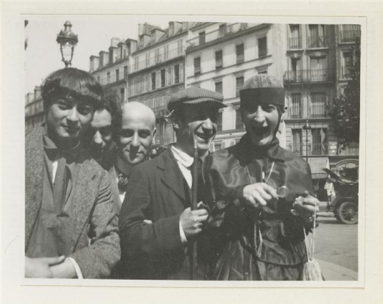 One of the essential themes of Kisling's art is the representation of the woman by nudes and portraits. In the studio of Montparnasse that Kisling shares with his friend Modigliani (1884-1920), the two artists regularly work on common models. Modigliani will make several portraits of Kisling and his wife Renée Gros. 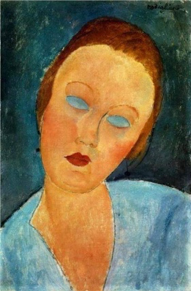 Our painting, Jeune Fille au Foulard Vert represents a young red-haired woman who occupies all the canvas. The complexion is treated with impastos using a typical Kisling technique in the mid-1920s. The model stands out against a gray-blue shaded background voluntarily stripped. The general atmosphere is calm and silent; the intensity is focused on the big blue eyes in the form of almonds of the girl who give the viewer a direct look not without a certain melancholy.
Like his friend Modigliani, Kisling does not seek to translate the feeling of the model but to touch the universal.

Kisling realised many portraits of his artist friends and also painted the most seductive models of the time, including the famous Kiki de Montparnasse, Arletty, Michele Morgan ...