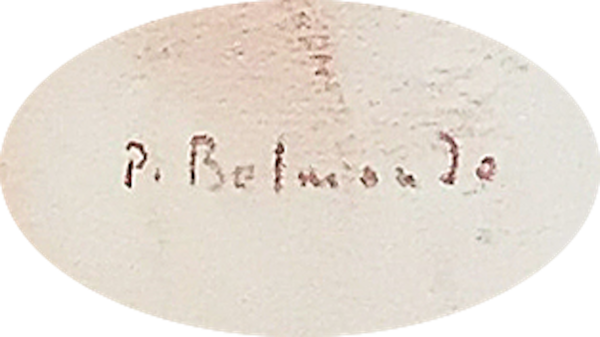 Born in Algiers to a modest family of Italian origin, Paul Belmondo began carving at the age of 13. He studied architecture at the École des Beaux-Arts in Algiers, which was interrupted by the First World War.

Benefiting from a grant from the Government of Algeria, Paul Belmondo continues his studies in Paris where he meets Charles Despiau who becomes his master and his friend.

A pupil of Jean Boucher, Paul Belmondo is a laureate of the Blumenthal Foundation in 1926. He obtains the Grand Prix of Art in Algeria in 1932 and the Grand Prix of the City of Paris in 1936. An accomplished sculptor who tries out all the disciplines offered by his profession, he goes from the medal to the monumental and exhibits regularly in the salons.

In November 1941, Paul Belmondo participated in a "study trip" to Germany by French painters and sculptors, organized by Arno Breker and the German ambassador to France, Otto Abetz. Professor at the National School of Fine Arts in Paris in 1956, he became a member of the Institut de France in 1960.

His themes are drawn from Antiquity and the Renaissance. In a refined style, the busts exude finesse, sensitivity where we feel the influence of Charles Despiau.

Paul Belmondo Museum
Boulogne-Billancourt (92,100)
"In the heart of Buchillot Castle, an 18th century madness, the Paul Belmondo Museum houses an exceptional collection of sculptures, medals and drawings by the one who was the last of the great French classical sculptors." His sculptural work consists of original plaster models. , preparatory works and marble works. "