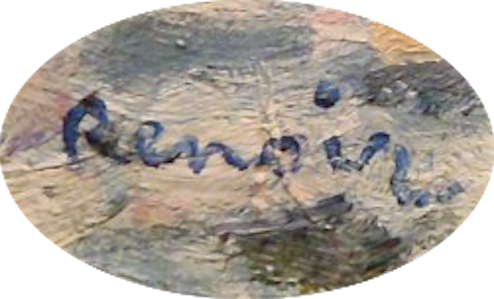 Renoir came from a very modest family. His father was a tailor and maintained his family with great difficulty. Renoir first began by painting on porcelain; This was, in a sense, his apprenticeship. To live, he then decorated fans and blinds. Having made some savings by his labors, he was able to enter the Gleyre workshop, and met Monet soon after in 1862.
He worked according to his tastes, by copying the great masters at the Musée du Louvre. His painting, first influenced by Courbet, found its first accomplishment in 1867. His Lise is a work where the great themes dear to Renoir are already fixed: the light and the body of the woman.
He was also faithful to his admiration for Delacroix: so his Parisian women dressed in Algerian women, refused at the Salon of 1872, were directly inspired by Les Femmes d'Alger. Renoir and Monet often worked side by side, performing works in the same spirit of research: La Grenouillère (1869) and later, La Mare aux Canards (1873). A great friendship bound them together, encouraging them to share their technical discoveries.

The visits he made to Monet at Argenteuil (1873-1874) were to allow him to divide his tone, to clarify his palette, to study all the transformations of light. With Monet, he found Manet, while the latter, at the instigation of Berthe Morisot, was converted to clear painting. These meetings in the garden of Monet, these sessions of work on the banks of the Seine were incredibly memorable. These were moments of intense activity. The technical discoveries succeeded each other. The new painting became clearer.

The first exhibition of the group (1874), which Renoir had organized and in which he participated, was to bring this new kind of painting to light in the eyes of all. If the auction of 1875 was a disaster, to which Durand-Ruel assisted impotently, it allowed at least Renoir to discover a new amateur: Chocquet. For Renoir, he later became an active amateur and a generous support. Renoir, pursuing his research on the luminosity of the atmosphere, applied himself to translate it on different themes and pursued it in very diverse settings: at the theater, in the open air: Le Moulin de la Galette (1876)

In 1880, staying at Croissy, he began his famous composition: Le Déjeuner des Canotiers, where he once again evoked the happy and sensual life that he enjoyed. This was a difficult and complex subject in which he could use all of the resources of his hand, where he could translate all the subtle sharpness of his sensations into the sparkling light of a summer's day. From 1881 to 1883, in spite of material difficulties, he stayed in Algeria. Then, he made a journey which determined the future of his work, in Italy, where he visited Florence, Venice, Rome, Naples and Pompeii. In 1882 and 1883, he stayed and worked with Cézanne at l'Estaque.

Under the still vibrant influence of his sojourn in Italy, Renoir undertook new research. The form in his zork no longer tended to be absorbed by light; On the contrary, it was described by the line; The contour narrows and became more precise, "It produces works whose material can vary, sometimes thick or rough, but all have in common a linear purity of contour, an atmosphere stripped".

Again in 1885, 1888, 1889, he had long stays with Cézanne, and by 1890, he adopted a creamy, supple, pearly style, which would become of great importance in his work, and would by far fix the spirit and the very image of Renoir. From now on, the main elements of his style were fixed. The components of his style would vary until his death.

Again in 1891, he stayed in the South. The following year he traveled to Spain, and Durand-Ruel organized in Paris an important exhibition of his works. In 1894, without fully achieving his goal, he struggled to get the State to accept the magnificent legacy of Caillebotte. It was only in 1897 that this legacy, amputated with a large number of paintings, could enter the collections of the State. He was attacked for the first time in 1898 by acute rheumatism, which was to be the calvary of the end of his life. From 1905 to 1909, his illness worsened and he decided to settle permanently in the South. He bought the land of Collettes at Cagnes where he built his house and his workshop.

In 1912, his illness became even worse, he continued his work indefatigably, being able to paint only by having the brushes attached to his wrists. In spite of his state of health, surrounded by experienced practitioners, he succeeded in carrying out an important work which ranked him amongst the great sculptors of his time. He died at Cagnes on 3 December 1919.