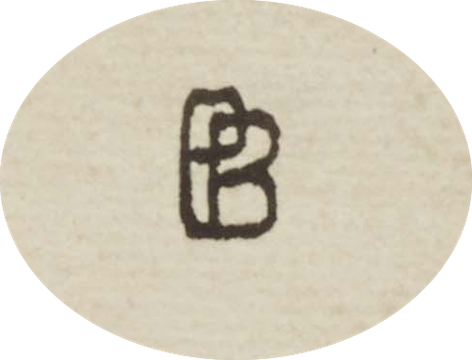 After obtaining his license in law, Pierre Bonnard unsuccessfully enters the competition for entry into the administration of registration. He was later employed in a substitute, but he soon opted for painting and entered the École des Beaux-Arts; Having presented himself at the Concours de Rome in 1889, he failed. The real place of its formation will be the Académie Julian, which has just been founded. He met there - his friends for all life - Édouard Vuillard and Ker Xavier Roussel, Maurice Denis and Paul Ranson, Félix Vallotton and Henri Ibels, Paul Sérusier.

In October 1888, Paul Sérusier, returning from Pont-Aven, showed to his friends, painted on a wooden plank (a lid of a cigar box), Le Paysage du Bois d'Amour, executed under the direction of Gauguin. Of this work-manifest, Pierre Bonnard and his friends will make their "talisman", each interpreting it in his way. The poet Henri Cazalis, the friend of Stéphane Mallarme, will baptize them with the name of Nabis (prophets in Hebrew). Bonnard, for his part, quickly renounced the sad and cold grays he had learned from his boss Jules Lefebvre to compose his palette, under the pretext of distinction; He launches joyfully in a transposition of the tangible world based on the iridescence of color, the vivacity of the trait, the freedoms of perspective. Japanese prints enchant him and he is nicknamed "the Japanese nabi". He was also described as "post-impressionist"; He indeed admired Claude Monet and Auguste Renoir and, without however imitating them, underwent the law of subtle filiation.
The first work that the public knew of him was, in 1890, the lithographic poster France-Champagne. Among the passers-by who noticed it, there were, principally, Henri de Toulouse-Lautrec.
Pierre Bonnard never considered the graphic part of his work as an accessory. "At that time," he wrote, "I personally had the idea of ​​popular production and the usual application: engravings, furniture, fans, screens, etc." It was the time of social art, of the generous ideas which Bonnard never denied, and which only circumstances prevented him from translating, as much as he wished, into deeds. Besides numerous sketches and drawings, his work includes a whole set of lithographic works, posters, books and illustrated magazines.

Bonnard began his career as a painter in 1891 at the Salon des artistes indépendants (Femmes dans le Jardin). He is interested in the scenes of family life (Mère et ses deux enfants, 1894) and street shows (Boulevard, 1895); He manifests a quiet love of simple people, and is pleased to evoke, on a background of embarrassment in Paris, young working-girls who pass by singing. His first feminine nudes appeared in 1899: intimate faeries observed even in the dressing-room where, unlike Edgar Degas, he likes to know only the graces of the body, in the exaltation of a light finely nuanced.
First private exhibition at Durand-Ruel, in 1896; Including Moulin-Rouge and Jardin de Paris. Bonnard participated in the first Salon d'automne in 1903. His second exhibition was organized by Bernheim-Jeune in 1906. He traveled to Belgium, Holland (1907), Italy (1908), became a professor at the Ranson Academy. He bought a small property in Vernonnet, in the Eure, and made several stays in Saint-Tropez. His palette becomes lighter, becomes more and more subtle and luminous (Cabinet de toilette, 1912). And the masterpieces follow one another: Le Sourire (1920), Le Corsage rouge (1926), Coin de table (1935), Nu dans le bain (1937) ... From 1924, a retrospective exhibition of the work Of Bonnard is organized at the Galerie Druet; In 1936, he was awarded the second Prix Carnegie .

Bonnard was passionately interested in the research of the new generation. Curious about all the subjects and all the combinations of forms and colors, he constantly renews himself ... Bonnard grew slowly, amplified his pictorial resources, and, with Picasso, asserted himself as the only famous painter who had not sacrificed , Under the pressure of success, the taste for great composition. "

In 1939 he retired to Cannet. Claude Roger-Marx writes: "He lived alone on his hill, in communion with heaven, in a cabin furnished with white wood, dominating Cannes with a thousand roofs, walkers, merchants, the sea." Pierre Bonnard published in 1945 A book of memories: Correspondances, his last lithograph is the Crépuscule des nymphes (1946), his last canvas, L'Amandier en fleurs  (1946-1947), where the sparkling whites, according to one of his usual techniques, More caressing both the irradiation of the color.