Watercolor on pencil lines on page of a sketchbook
Study wash head on the back
33.9 x 26.2 cm

This work is similar to that of lavis described and reproduced in Roger de la Fresnaye : Catalogue raisonné by Germain Seligman, Neuchâtel, Switzerland, Editions Ides and Calendes, Catalogues Raisonnés series, 2000, at p. 224 under Nr. 396.

In 1920, Roger de La Fresnaye with his friend Gampert moved to Grasse in the Alpes-Maritimes. They first move into a small house on the ramparts of the city, then villa Félicie on the heights of the city. The villa Félicie is surrounded by terraces dominated by steep rocks as can be seen in this watercolor,Maison aux deux Cyprès, which represents it. "More spacious than the previous one, the house has a guest room that Courmes will be the first to occupy. (...) The Fresnaye (...) paints most often in the garden where a tarpaulin protects it from the heat of the sun of the Mediterranean. The artist meets neighbors with whom he sympathizes: Victor Sandeman, a British colonel, Germaine de Joncquières, the daughter of an admiral, Lebel, an architect.
In the first days of January 1921, Jean and Valentine Hugo moved villa Félicie (...)
Poulenc then stays on the Côte d'Azur. The Hugos' introduce the young musician to their host. After their departure from Grasse, Poulenc spent the day of February 1st at the villa Félicie where La Fresnaye made several portraits of him." (Cf. Roger de La Fresnaye. Une peinture libre comme l’air, followed by the unpublished letters from La Fresnaye to Cocteau by Michel Charzat, op cit, 2017, 146, 149 and 150).

On the back of the watercolor is a wash study of which here is the photo. 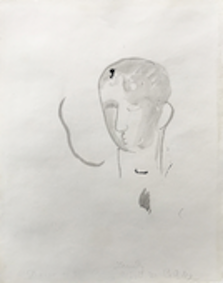