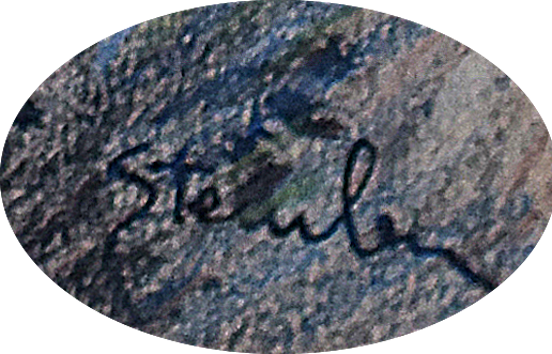 Originally from Germany, the Steinlen family moved to Vevey in Switzerland in 1831. The artist's grandfather, Théophile-Christian (Gottlieb) (1779-1847), had taught drawing in Vevey, and one of his brothers, Marius Steinlen (1826-1866), was a painter, and a pupil of Charles Gleyre. Steinlen was born in Lausanne in 1859.

He studied theology at the University of Lausanne for two years, in 1879, before turning to art, following some training in drawing industrial illustrations in Mulhouse. Steinlen moved to Paris with his wife Émilie in 1881, and then moved to Montmartre in 1883. He quickly became acquainted with the gravitating artistic personalities of the period.

He entered into a professional relationship with Adolphe Willette and Antonio de La Gandara with whom he attended the Chat Noir, the cabaret run by Rodolphe Salis, from 1884. He also became the friend of Henri de Toulouse-Lautrec, who regularly frequented the place. He, of course, knew Aristide Bruant. He exhibited initially at the Salon des Independants, in 1893, then regularly at the Salon des Humouristes.

An opponent of injustice, sympathetic to the disinherited, Steinlen depicted scenes from the street, factories, mines, scenes of beggars, workers in misery, ragged children and prostitutes. He was also a cat specialist, who he frequently drew in all their fantasies; playing, asleep or angry. He also drew the female nudes.

Steinlen preferred drawing and pastels in order to portray the daily life of the street and its small trades. The realism of his drawings had inspired some of Jean Peske's works, or the beginnings of Pablo Picasso. He also developed an engraved work, using the same themes as his drawings, or by mixing politics, as in the lithographs by which he illustrateed the misfortunes of Belgium and Serbia in 1914-1918. But it is especially his posters that, like that of the Tournée du Chat Noir, are at the origin of his popularity. He also practiced sculpture on the theme of cats. He illustrated literary works, such as La refonte in 1903 and collaborated with various humorous journals such as the Gil Blas which illustrated, L'Assiette au Beurre (from No. 1), Le Rire et Les Humoristes, and of which he founded in 1911 with Jean-Louis Forain and Charles Leandre.

His political conviction led him to draw many posters against the First World War.