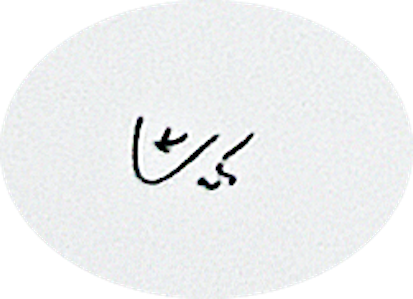 Born in Moscow into a well-to-do and educated family, Wassily Kandisky began studying law before giving up his university career to enter the Munich Academy of Fine Arts in 1896, after discovering Impressionism. His first paintings are of a naturalistic essence, however his various travels throughout Europe and a particular stay in Paris in 1906-1907 made him discover other ways of painting, through Cezanne, Matisse and Picasso. His creations are organized in Impressions (depending on the external reality), Improvisations and Compositions (more elaborate Improvisations, based on images from the unconscious).

In 1911, he founded with Franz Marc the German Expressionists Der Blaue Reiter (the Blue Horseman). They published a year later the Almanac of the Blue Horseman which included a particular article by Kandinsky on the question of the form in which he states that, "form is the external expression of inner content" and that one form is not necessarly better than another. The same year, he published Du spirituel dans l'art (translated into French in 1949), the first theoretical treatise on abstraction which allowed him to make himself known and spread his ideas. This influence will be complemented by his teaching activity at the Moscow Vkhutemas from 1918 to 1921, then at the Weimar Bauhaus from 1922 and Dessau from 1925; he brings together the principles he taught in Point, Line, Plan in 1926. The theory, however, is for Kandinsky distinct from his practice which follows his own evolution.

The war marks a deep crisis for Kandinsky and he creates no paintings in 1915 and 1918, and only a few in 1916 and 1917. The breath comes back with the Russian revolution, it is then occupied by many official functions (especially the reorganization of museums he suggests replacing the chronological order with formal categories) and pedagogical activities. In 1921, criticized for his actions - especially for the Inkhouk program, Institute of Artistic Culture - he went to Germany to teach at the Bauhaus. His paintings are geometric and colorful.

The Bauhaus could have made possible, in Kandinsky's eyes, for his utopian project of rebuilding a world placed under the sign of the spiritual: he will develop his research in theory as in practice, but the hope will leave place from 1933 to the History, since the Bauhaus was closed by the Nazis in 1933. He then moved to France, Neuilly-sur-Seine, where he remained until his death in 1944.

Kandinsky remains the father of abstraction that announced abstract expressionism.