Martigues, postcard from the fifties

In 1898, Francis Picabia discovered Martigues, a town in the Bouches-du-Rhône in Provence. The artist stayed there regularly until 1906, painting numerous landscapes in a style often influenced by Impressionism. 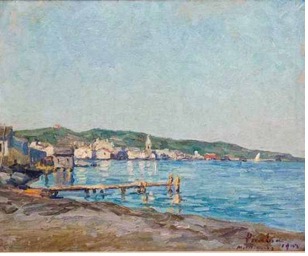 As a teenager in the 1950s, Arthur Brandt met Marcel Duchamp by chance during a chess game in Washington Square Park. A. Brandt did not recognize Duchamp but admired his pipe, being himself with a meerschaum pipe, and the two men bet their pipes on chess. A. Brandt won the game and received the pipe curiously painted in Duchamp's hand. Twenty-five years later, A. Brandt would begin collecting art from the Dada and Surrealist periods by Duchamp, Kurt Schwitters, Man Ray, Kurt Seligman and Francis Picabia. In the early 1980s, Brandt met private dealer Timothy Baum who became his advisor, helping to guide Brandt's purchases and nurture his interest in Dada and Surrealism. As his collection grew, A. Brandt's interest in Cubism, Futurism and the Russian Avant-Garde expanded.
Dr. Brandt collected all mediums, amassing one of the finest collections of Surrealist and Dada paintings, sculptures, objects, works on paper and photographs.