Verso of the drawing

Famous as the founder of abstract art, but also as a theoretician of art, KANDINSKY is one of the first Russian painters with MALEVITCH to express himself using an abstract graphic language.

At the end of 1921 KANDINSKY left the Soviet Union for Berlin. Walter GROPIUS (1883-1969), architect and founder of BAUHAUS, invited him to teach at the BAUHAUS school in Weimar in 1922, where he accepted the post of professor for the mural painting studio until 1933. The correspondences between colors and forms, the study of isolated elements are at the heart of his reflections on their visual effects. Parallel to this teaching, he proposes a course on the forms and another on the "analytical drawing".
By publishing in 1910 'Spiritual in Art', Kandinsky delivers the art of the real dictatorship and places it in a spiritual dimension. To represent this new vision of the world, he develops a new language based on a grammar built on sensations and a vocabulary that involves geometric shapes. The painting completely frees itself from its ties with reality. 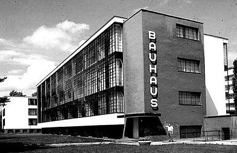 BAUHAUS is a school of art, design and architecture, founded in Germany by the architect Walter GROPIUS in 1919, following the merger of crafts and the Academy of Fine Arts in Weimar. His goal was to remove the barriers that existed between art and crafts, to bring out an artistic creation turned to the utility.
The painters Paul KLEE, Wassily KANDINSKY, Johannes ITTEN, Josef ALBERS, Max BILL, Lyonel FEININGER taught there.
The innovative scope of the school shocks and provokes the hostility of the academic and bourgeois circles of Weimar, but in 1925 the school must move to Dessau. The school was finally dissolved in 1933 by the Nazis who saw it as the "cradle of cultural Bolshevism".

Initially influenced by Cubism, KANDINSKY however asserts his personality by a great rigor in the treatment of perspectives. He structures his works using essentially pure elements: straight lines, right triangles, ... to create his works. Geometric elements take on a great importance especially the circle, the semicircle, the angle and the straight or curved lines.

From a strict abstraction, our drawing is made even more pure by the black of the ink on the white of the paper, its parallel lines which cut or break are decentered leaving a large void broken by a circle, itself composed of two half-spheres.
All elements are suspended in space.
No place is left to chance, nor to improvisation, geometry is rigorous nevertheless poetry and mystery are none the less absent.

By the play of pure forms and economy of means, KANDINSKY anticipates here the Geometric Abstraction of the Fifties and also the Kinetic Art and Minimalism