Our drawing by Cocteau from the early 1920s is the only such complete, recorded drawing from this period on the theme of the Corrida. A simpler version of the same subject is illustrated, under the title Jardin Cruel, in Cocteau's first book of drawings, entitled Dessins de Jean Cocteau, published by Stock in 1923. In the 1950s, Cocteau accompanied his friend Picasso on many occasions to bullfights in Spain and France, which Picasso was passionate about. 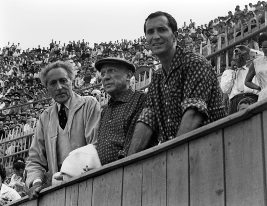 "We had in the Arles bullring the most beautiful bullfight that can be seen. Luis Miguel gave the alternative to the young Parisian bullfighter. In fact, Luis Miguel Dominguin gave a perfect lesson in bullfighting. Without a mistake, without grimaces, without useless imprudence, without bravado. It was a superb show. [...]. As far as the young Frenchman is concerned, he will never be a real bullfighter. He lacks grace and his absurd courage pushes him to disorder. He is "dangerous" and causes discomfort. His Spanish-style bravado is very ridiculous after a mediocre job. Luis Miguel was watching him from afar and was constantly on the point of flying to his rescue. To tell the truth, at the moment of killing, he lost his head. But the audience, having no sense of style, applauded him a lot. He was sure he was an ace. He is mistaken".
(Jean Cocteau, Le Passé défini, October 1958)