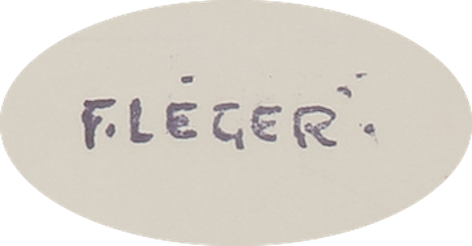 Fernand Léger was born on February 4, 1881 in Argentan in the Orne. His mother raised him alone - his father died when he was four years old. She was a very pious woman, who lead a quiet life. "He was never a studious pupil" references say. He entered as an apprentice to an architect of Argentan.

Gifted for drawing, he settled in Paris in 1900 where he attended the School of Decorative Arts and the Julian Academy. In the neighborhood of Montparnasse - his first studio was in avenue du Maine and then in La Ruche - he entered the Parisian artistic milieu and became friends with Robert Delaunay, Marc Chagall, Blaise Cendrars ... From 1910, Cubism, which became more and more in the artistic avant-garde, seduced him in turn and led him to join Albert Gleizes, Jean Metzinger, Henri Le Fauconnier and the Duchamp brothers, founders of the group of the Section d'Or. On the strength of these meetings and his first contract with the dealer Daniel-Henry Kahnweiler, he participated in a series of exhibitions in Paris, Moscow and even in New York at the Armory Show in 1913. The period of his  "Contrasts of forms" imposed his art into the artistic avant-garde.

But the war suddenly interrupted these first successes for four years. Sent on the front as a reservist, then a stretcher-bearer, he was conscious of losing precious years. However, the experience he saw, both the horror of war and the fraternity of the other soldiers, marked him deeply and gave new strength to his work.
In 1917, he signed an important contract with the gallerist Léonce Rosenberg. Reformed at the end of the same year, he undertook major paintings which were increasingly influenced by the theme of modernity. He collaborated with Rolf de Maré, founder of the Swedish Ballets, for the sets and costumes of a ballet, with Robert Mallet-Stevens and Marcel L'Herbier for the scenery of the film L'Inhumaine, and with Dudley Murphy for Film Ballet mechanics. In 1933, he participated in the International Congress of Modern Architects (CIAM) along with Le Corbusier, whom he had kept company in recent years.

With the arrival of the Popular Front, his political commitment manifested itself through conferences and large murals in which he realized his dream of reconciling avant-garde and folk art. But the war again interrupted its work. In 1940, he settled in New York. The modern city inspired his last great compositions. Back in France at the beginning of the year 46, still very active, he devoted himself especially to monumental works.

In the early 1950s, Fernand Léger participated with Jean Bazaine and Jean Le Moal in the decoration of the Church of the Sacred Heart, built in a working-class quarter of Audincourt (Doubs), for which he designed the seventeen stained glass windows of the nave and choir and also drew the cartoons of the tapestry behind the high altar.

Léger had directed several schools of painting, first in Montrouge and then in Boulevard de Clichy, in Montmartre. He was the master of Neşet Günal and trained many pupils who spread his ideas throughout the twentieth century in France (Pierre Faniest, Étienne Hajdu, Tony Cariffa, Abner, Carlos, René Margotton ...) In Scandinavia (Eric Olson, Franciska Clausen, Otto G. Carlsund ...), he taught classes to singer-songwriter Serge Gainsbourg.

In Biot (Alpes-Maritimes), the National Museum Fernand Léger, was built by his wife, Nadia Léger, and Georges Bauquier in devotion to him, exhibiting the largest collection of his works.