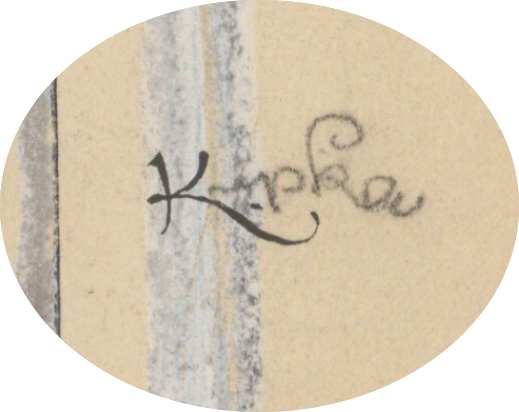 František Kupka was born in 1871 in Opočno in Eastern Bohemia (region of present-day Czech Republic) into a family of modest origins. He first received his artistic training at the Beaux-Arts in Prague in 1884, which he later continued in Vienna, Austria. At the same time, he studied philosophy, literature, natural history and even occultism. All these elements had marked his life and his career. Kupka arrived in Paris in 1896 and settled in the heart of the bohemian Montmartre. To make a living, he worked in the illustration industry for the press and contributed to anarchist titles such as 'L’Assiette au beurre'. Married and settled in Puteaux, he attended the group of Jacques Villon and in the 1910s became close to Duchamp, Picabia, Metzinger and Gleizes, i.e the cubist young school.

His painting adopted more abstract tendencies in the early 1910s, a decade that saw the birth of the pioneers of abstraction (Kandinsky, Malevitch, Mondrian ..). Kupka cultivated his independence by refusing to fully adhere to the cubist school, although he exhibited with the Puteaux group at the Salon d'Automne.

He volunteered in the Foreign Legion, and supported the independence of the Czechoslovak Republic in 1918. A fighter yet later declared inapt, he actively participated in the anti-German propaganda and adhered to the nationalist struggle. During this period, his work on abstraction was put in parentheses but the painter returned to his ambitions in 1919. Appointed professor at the Academy of Fine Arts in Prague, he returned to France and participated in the creation of the group "Abstraction -Création", a group thought of by Auguste Herbin in the 1930s. He left the movement in 1934.

During the Second World War, Kupka took refuge in the Val-de-Loire and participated again in propaganda works in favor of the invaded Czechoslovakia. In the 1950s, the artist began to see the recognition of his work. He is one of the great figures of the Salon des Réalités Nouvelles in Paris and his work is shown internationally. He died in 1957 at the age of 86.