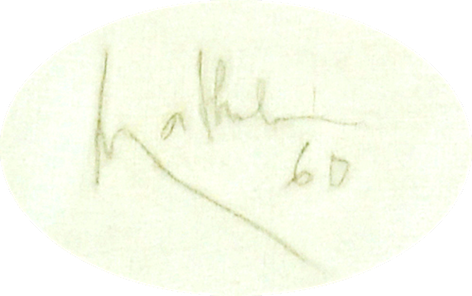 Mathieu is one of the fathers of Lyrical Abstraction. Born into a family of bankers, he studied law, literature and philosophy and obtained a degree in English. In 1942, he decided to turn to the visual arts and executed his first oil paintings. He realized his first paintings in an intellectual process, from readings. Self-taught, he was convinced of the possibility of a graphic expression, independent of plastic representation and of any reality. His first works in this direction date from 1944: Inception and 1945 Evanescence-Eternity, in which he squeezed paint directly from the tube. He practiced the teaching profession for a few year before embarking on a career in art.

Opposed to the neo-constructivist abstraction that had conquered the Salon des Réalités Nouvelles, he contributed to the definition of lyrical abstraction. In 1946, he held his first exhibition in Paris at the Salon des Moins de Trente ans. In 1947, he exhibited at the Salon des Réalités Nouvelles, where his paintings composed of paint stains sprung directly from the tube and spread with his fingers. He organized the exhibition L'Imaginaire in 1947, and in 1948 the exhibition HWPSMTB, which brought together Hartung, Wols, Picabia, Stahly, Mathieu, Tapie, Bryen. Then, he organized the Black and White manifestation, confronting the painters of his group of Paris and a few recently discovered American painters who seemed to work substantially in the same spirit. His technique is defined by his gestures from 1948, as in his Red Decadence, Arithmée, Phosphène, Pertre II or Acone and in 1949 Incronation. Despite appearances, his design is fundamentally different from the Far Eastern calligraphy in that they are not based on any meaningfull vocabulary, but instead, on non-conventional and unfixed signs that are always renewed. However, he does execute them with the same rapidity. In 1950, he made his firts Tachist paintings and had his first solo exhibition at the Galerie Drouin in Paris. Since that year, he exhibited in the US and Japan.

For the Salon of May 1954, he directed the Bataille de Bouvines, followed by a series of battles. From the same year, 1954, he performed Happenings before an audience; he painted vast canvases in record time to present the speed and spontaneity of his gesture. Thus, in 1956, at the Sarah Bernhardt Theatre in Paris, Mathieu, in front of nearly 2,000 spectators, created a canvas of 4 × 12 meters using no less than 800 tubes of paint.

Mathieu advocated for the continuation of the tradition underpinning revolutionary artistic movements, a point of view he expressed on the occasion of conferences and numerous writings up until his book Au delà du Tachisme in 1963. In the same year, 1963, Mathieu acquired official recognition thanks to his high retrospective at the Museum of Modern Art of the City of Paris.

From that turning point, Mathieu spent a year without painting. He then decided to adopt a dialectical approach whereby improvisation was permanently controlled and accidents were eliminated. This new controlled manner resulted in small format paintings, perfectly balanced, often taking the appearance of heraldic coat of arms.

He applied these new processes in various mediums, creating a triumphal arch in 1962, a chair for the national furniture in 1968, a table service for les Ateliers de Sèvres and typefaces for the foundries Peignot.

In 1973, he made his only architectural work by drawing plans for a factory in Fontenay-le-Comte. The result, called the Mathieu factory, shaped like a star with 7 unequal branches is fully made of glass was seen by the artist as a way to link the workplace with nature.

In 1975, Mathieu was elected a member of the Academy of Fine Arts. In 1980, his painted work showed a new maturity, he broke up with the last vestiges of Classicism, abandoned the central figure and diversified the range of colours of his palette.

He became an Officer of the Order of the Crown of Belgium in 1982. The 10th of June, 2012, Georges Mathieu died at Ambroise Paré Hospital in Boulogne-Billancourt.