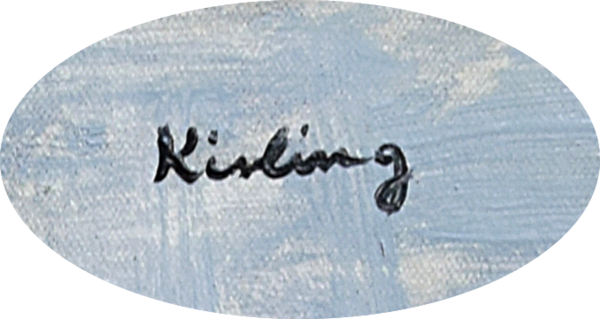 Moses Kisling was born in 1891 in Krakow, Poland into a modest Jewish family. He studied at the Krakow School of Fine Arts from 1907 to 1911 and was a pupil of Jozef Pankiewicz who strongly encouraged him to go to Paris.

In 1911, he moved to Montmartre at the age of 19, then to Montparnasse a few years later. During the First World War, he joined the Foreign Legion and was seriously wounded during the Battle of the Somme (1915), which earned him French citizenship.

Kisling was one of the principal representatives of the Paris School, which mainly included Jewish artists from Eastern Europe and Russia. He was the friend of many of his contemporaries, including his neighbor Amedeo Modigliani, who made his portrait in 1916. His workshop was the meeting place of the artistic gratin of the time (Cocteau, Max Jacob, Juan Gris, Derain. ..). Thanks to his social contacts and his financial success he received the name of "Prince de Montparnasse".

His style was first influenced by Derain and Cézanne. Then, whilst in contact with Georges Braque and Pablo Picasso, he painted in a more geometrical manner, became immersed in the cubist movement and borrowed, from the Nabis, the absence of perspective. He was a master of the female nude, (Kiki de Montparnasse often posed for him) and his portraits of all Paris (Arletty, Cocteau, Colette, Marie Laurencin ...) earned him a great reputation at the time.

When the Second World War broke out, Kipling's Jewish origins forced him to flee the Gestapo, he went through Spain, Portugal and settled in 1941 in New York. His paintings also met with some success across the Atlantic, exhibiting at the Whitney Museum and the Barnes Foundation in Philadelphia. He returned to France in August 1946 and finally moved to Sanary-sur-Mer in the Var where he died in 1953.