Certificate of authenticity by Mr. Tjerk Wiegersma for the Zadkine Research Center, Brussels on July 22, 2018

Ossip Zadkine is one of the greatest sculptors of the 20th century. Throughout his life, he drew and painted gouaches and watercolors.
Couple dans une Chambre of 1919, by its theme and style, is very representative of Zadkine’s cubist graphic work after the Great War. It could be an evocation of the artist himself and his future wife, the painter Valentine Prax (married in 1920) in their apartment or studio of the Rue Rousselet in Paris. The dynamic of the composition is structured by the obtuse angles and the truncated perspective accentuated by the leaking floorboards. The static bodies of the two nudes seem almost less alive than the furniture and evoke the primitivist influenced wooden sculptures realised by the artist at the same period. Some everyday life elements appear in other watercolors of Zadkine of 1919 such as the wooden bed or the yellow ochre folding screen. 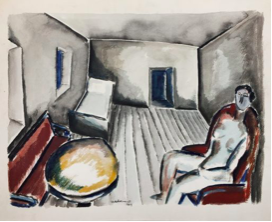 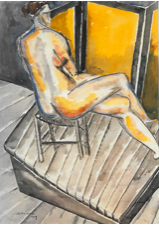