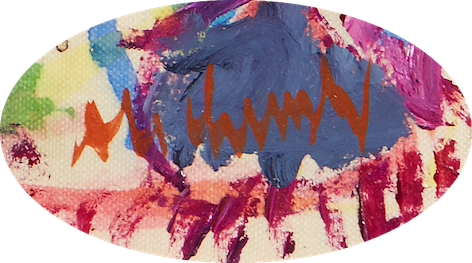 In 1944 Pierre Alechinsky entered the "Ecole Nationale Superieur d'Architecture et des Arts Décoratifs' in Brussels where he attended courses on book illustration and typography. In 1947 Alechinsky joined the group "Jeune Peinture Belge". Upon completion of his artistic education in 1948, Alechinsky spent five months in Paris. He met the poet Christian Dotremont in Brussels and joined the group "CoBrA" in 1949, whose semi-abstract expressionism decisively influenced him around 1950.

A scholarship from the French government allowed him to go to Paris in 1951. In 1954 he met the Chinese painter Walasse Tin, who inspired him to travel to the Far East. Very impressed by Japanese calligraphy, he produced a film on script art in Japan, which was awarded a special prize at the international art film festival in Bergamo. After his return from Asia, he joined the directors board of the "Salon de Mai".
In 1960 Alechinsky received the Hallmark prize in New York. In 1963, the artist moved to Bougival near Paris. Over the coming years, numerous trips lead Pierre Alechinsky to Mexico, Lapland, Turkey and several times to New York. In 1970 he received the order to design an Air France Boeing 747.

Furthermore, Alechinsky resigned from the board of the "Salon de Mai". In 1975 the "Louisiana Museum" in Humlebaek, Denmark, installed an Alechinsky Room. In the same year, the artist burned 200 stored paintings which he regarded as unfinished.
Alechinsky received numerous honours and prizes for his works, including a prize at the Trienale de la Gravure in Belgium in 1966, the Marzotto-Prize in Italy in 1968, the Andrew-W.-Mellon Prize for his complete work from the Carnegie Museum of Art, Pittsburgh in 1976. In 1983 he was appointed professor and head of a painting class at the "Ecole Nationale Supérieure".

In 1994 Pierre Alechinsky received the Honorary Doctorate of the University of Brussels. Alechinsky also painted murals for public spaces, in 1976 he painted the Brussels Metro station Annessens with Dotremont, and in 1985 he accepted the order to design the waiting room of the ministry of culture in Paris. In 1992 he designed the entrance hall of the French ministry of education in Rue Grenelle, Paris.
Alechinsky's works can be found in many museums and collections throughout Europe and America.

In 1998 a major retrospective exhibition was devoted to Alechinsky at the Paris "Galerie Nationale du Jeu de Paume".