Wise and foolish Virgins of Spanish Romanesque Art, dating from the end of the 11th c. - beginning of the 12th century. These frescoes from the churches of Sant Quirze de Pedret and Santa Maria d'Aneu (a municipality in Catalonia, Spain) were acquired by the National Art Museum of Catalonia in Barcelona (1919-1923) to be transferred and exhibited there.
The Virgin occupies the main scene.
The style has a strong Byzantine influence. From Sunday 24 to Sunday 31 March, Semana Santa is celebrated in many Spanish cities, the most important of which is Seville, in Andalusia.
Holy Week begins on Palm Sunday and ends on Easter Sunday, when the Resurrection of Jesus is commemorated.
During these 7 days dedicated to the Passion of Christ, 60 brotherhoods (Hermandades and Cofradías) go out in procession to the cathedral, conclude their penitential station, before returning to their starting point. 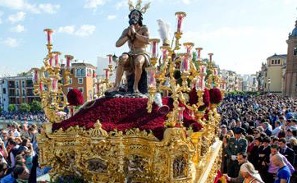 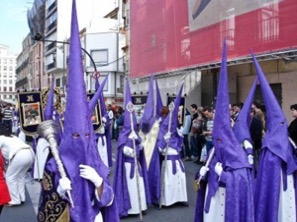 This work, The Procession in Seville, belongs to Francis Picabia's famous Transparencies series. Here, the artist was inspired both by a Romanesque fresco he had seen in Barcelona and by a richly decorated altar depicting the Passion of Christ, carried on the backs of men during Holy Week in Seville.

"Francis Picabia's artistic career is a kaleidoscopic series of experiments. [...] in his fifty years of painting, Picabia has constantly avoided adhering to any formula, or wearing any label. He could be called the greatest defender of freedom in art [...]
[From 1927 onwards] he devoted himself to the study of transparency in painting. Through a juxtaposition of transparent forms and colours on the canvas, so to speak, he expressed the sensation of a third dimension without the aid of perspective.
Prolific, Picabia belongs to that type of artist who possesses the perfect tool: a tireless imagination."

In 1912, Picabia painted a famous cubist picture bordering on abstraction, entitled The Procession à Seville, a masterpiece from the artist's Orphic period.
The painting is now in the collections of the National Gallery of Art, Washington, USA. 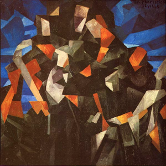